If you suffer from anxiety, please know, I know exactly how you feel. I became a therapist after transforming my own anxiety and I want you to know, most of all, that its absolutely possible to feel not only normal again, but even better than before

Anxiety is debilitating and can effect every aspect of life from our emotions and sleep to how we relate to other people and how we percieve ourselves. I found myself suffering from anxiety quite severely in 2006 and have been studying it ever since. The physical components, the mental load, the emotional weight. Because of that, and because I have personally mastered it,  i’m now pleased to tell you that any anxiety you suffer from, can ultimately be a GIFT.

I also know how unlikely that will sound to you, we are so often told that its ok to not be ok – and it is! but it is NOT your only option. We each have our own personal experience, and I can offer you the experience of going from suffering anxiety to being completely free of it. I have walked this path, and spent more than 14 years researching and studying it.   The reason for believing your anxiety is too big to overcome is that is you are caught up in the limited perspective of your fear response – which is why we suffer anxiety at all. You probably feel like nothing can make a difference to you – and so the first thing I want you to know, is thats really just the limit of the fear perception – the filter your mind is forced to look through because anxious thoughts and feelings are dominant within you. Those thoughts and feelings may be entirely valid, if you have had a scary or horrible experience, they certainly will be – but, the fear response limits your focus to the exclusion of everything else –  you have much more available to you than your fear perception will allow you to be aware of, until you learn how to. This is not because your mind has went wrong in some way – this is a perfectly working survival mechanism designed to keep you safe – it is just being over activated, and because of that, your mind has become over focused on things that are not the only truths, for instance that you are stuck with feeling this way and that nothing helps.

So how exactly can anxiety be a gift? Simply because doing “the work” that transforms your anxiety, on a mental, emotional and physical level,  transforms you in deeper ways that you may never have realised were out of balance in the first place. Self esteem increases, unworthiness vanishes. Confidence becomes natural to you, and that constant fear melts away.  Dealing with anxiety fully, and properly, is not about a band aid fix. It is not meditation, or hypnosis (and thats me! a fully qualified hypnotherapist telling you that!) or trying to positive think your way out of triggers. More than anything, it isnt about constantly trying to manage how you feel forever more – It is developing the true inner awareness of your true self and the strengths and abilities that have always been within you, but never fully realised. Its about creating true wholeness, not positivity (although that is a side effect), developing real mental and emotional fitness, and thats what I, and doing the work offers you. 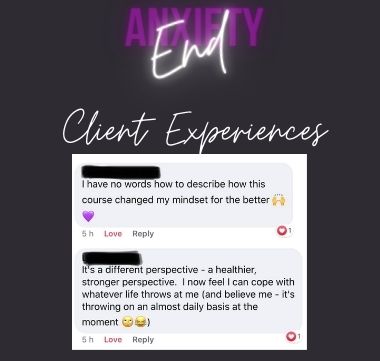 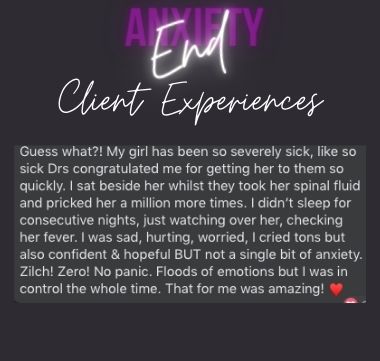 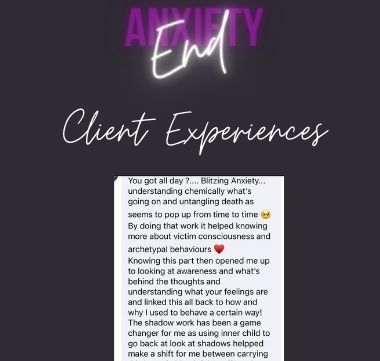 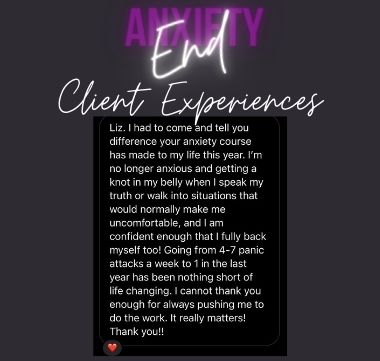 So what is the work? Simply, its getting to know you, and how to ‘work’ your inner resources.  Its looking at your beliefs, thoughts and attitudes, and understanding them. Its developing the emotional and mental fitness that underpins good emotional and mental health. Its awareness, and expanding of your consciousness.  You have strengths and capacities that you are likely unaware of – you also have deep, negative perceptions that no longer serve you, and the work uncovers these within you, gently, but fully.

I have created online self study courses which are masterclasses in your personal psychology, perceptions and how to actively utilise them, allowing you to address your anxiety fully at your core, and as such, resolve it for good. Courses are available as a standalone self study option and are also included in all personal anxiety session packages (recommended for anxiety and/or panic attacks which feel unmanageable or particularly strong).

A note on panic attacks – Panic attacks are terrifying, and can seem like they come out of nowhere. Feeling dizzy, stomach in knots, heart beating faster, sweaty palms and flushed cheeks are just a few horrid symptoms. The only thing ever really missing from a panic attack, is a thing to actually panic about. This makes them particularly insidious – how can you either avoid them or fix them if you don’t know what’s causing them?

Well, surprisingly, I can tell you what’s causing them, and what I am about to tell you, is the single most helpful piece of info EVER when it comes to panic attacks. Or at least, it is when you are calmly reading this post, if I tried to tell you this during an attack, you wouldn’t believe a word. It’s so effective, I recommend you tell everyone you know who suffers from them. Really. Therapist approved advice. And that advice is -When you feel an attack start, sit down somewhere, and have it. Don’t try and stop it, or find the cause. Let it come, accept it will last around 15-20 minutes, and then let it go.

So, now that we’ve dealt with that, and you are possibly asking yourself what kind of advice is that?! Let me explain why this is the best thing to do.

Panic attacks are actually a physical response and begin much earlier than when you become aware of them. They feel out of the blue, but they are really not and something, possibly even a few things combined, triggered that response. So what exactly happens?

Your emotional brain picks up a danger. In cases where you know what the trigger is, for instance a particular fear, it’s usually an increased likelihood of that fear happening In the near future, but for unclear triggers, it could be anything really, because your emotional brain sees stress as dangerous, and you will know how many different levels of stress you encounter in a day. Running late, kids missing a shoe, work needing something, the weight of the mental load. Add onto that any fears you have, financial worries, anyone getting ill or something not working out. All these things collect together, and cause a stress build up (it’s worth noting, this can be so long term that you don’t even notice them all piling up) and this is when your emotional brain takes notice.

So, you are hard wired to keep yourself safe above all else, and when your emotional brain sees this happening, it sees all that stress as overwhelming, and therefore a threat, so it signals your adrenal system to release adrenaline into your bloodstream as a response – this readies you for a fight or flight response and puts your body into its most reactive state in preparation for either, but it’s also what causes all the physical symptoms you feel.

Your emotional brain doesn’t work on logic, it works on feelings, and so it leaves you feeling awful, like something horrendous is about to happen and adding to it no answers as to what it might be. We naturally try to move away from anything that is uncomfortable quickly, so we try to avoid the feelings, quickly noticing that we can’t (it is literally a hormone in your bloodstream at this point) and actually heightening the panic because we feel helpless and therefore more under threat.

Allowing the attack seems counterintuitive, but, sometimes worrying about having them adds to the stress, as well as the energy used in trying to fight them off. Yes they feel horrid, but if you sit down (or lie down) and wait it out, nothing bad will come from it. You won’t have heart problems, you won’t die, and you really are safe. My End Anxiety Live course included treatment of panic attacks.

Click the group image on the left to join my FREE Daily Enjoy Confidence group where you can find me regularly running masterclasses and providing resources on Anxiety, Confidence, Self Worth and all things mindset!